How the ReLEAF Center saves hours every day with Flowhub

3x sales after transition from med to rec 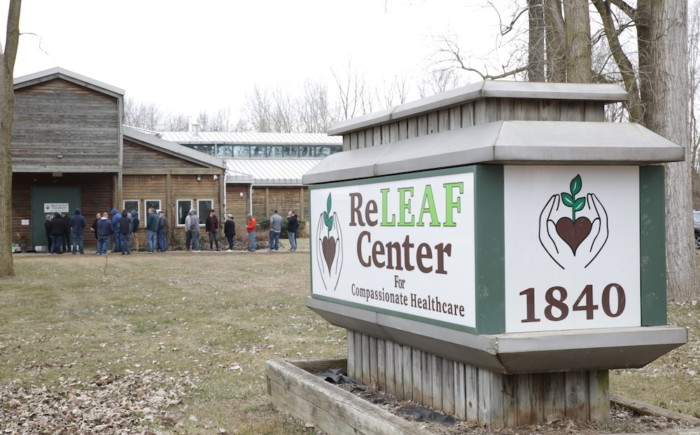 About the ReLEAF Centers

We visited the ReLEAF Center location in Niles, Michigan, and talked to George about his experience with Flowhub. Here’s what he said — in his own words — about why he loves Flowhub and how the software allows him to better serve his community.

FH: What is the story behind the ReLEAF Centers?

George: We opened our first store in Michigan in July of 2019 up in Chesaning. In November, we opened up both Lapeer and Niles. We did two stores within two weeks, for medicinal only. Then we opened up rec in Chesaning and Niles in January of 2020. So we're going fast, but if we don't do it, somebody else is going to.

We want to grow as a company, as a family. Whether it be another store, five more stores, or five more grows. Our sights are set on continuing to help as many people as we possibly can with the time that we have here.

We're not opening a store just because we want money. We're opening a store because we've listened to the people and they don't have ease of access to this stuff. If you can bring [cannabis] to areas where people need it, they're going to appreciate that. And that'll take the stigma away.

FH: How was the transition from medical to recreational?

George: It's been crazy. We didn't expect the turnout we've been having at both locations.

We had lines out the door with medical when we first opened, because we were the first place here in Southwest Michigan to open. Otherwise you've got to drive at least 60 to 100 miles out of the way.

People loved it because they could come in and get their stuff and it was safe and it was clean and it was quality. People love being able to come into a store where you can just buy weed, you know.

When rec turned on, it skyrocketed because now you don't have to have a medical card. You don't have to go see a doctor. All you have to do is be 21, obviously with proper valid identification.

Now the supply factor is a headache. There's more people that are trying to get it recreationally than the state has approved to produce it. I mean, literally we can't keep anything on the shelf.

FH: How does the ReLEAF Center approach customer/patient education?

George: Look at our whole name, the ReLEAF Center for Compassionate Care — just because we're rec doesn't mean that we want to step away from compassion. We're giving people something that they want, but also showing them compassion and explaining the product and teaching them about it.

We try to treat everybody like family. You'll see me go out numerous times through the day, just to go talk to people. I'll stand outside for 15 minutes and answer their questions. Some people may have driven an hour and then realized we may not have an edible they like. You go out and say, ‘Hey, listen, next time you come in, we'll make sure we have one set aside for you.’ They're going to continue to come back because of just who you are.

When people come in the door, they are still kind of weary about it. We take the time to educate people. I feel like knowledge is going to end that whole negative stigma.

There's more chemicals on the food that you buy at the grocery store than any of the products that we sell. I feel like that just tells you something alone.

FH: What was your first impression of Flowhub?

George: How easy it is to use.

"If somebody were to open [Flowhub] up, they can navigate themselves with no training to do what that they need to do, whether it be checking in a customer or running an end-of-day Metrc report."

FH: What makes Flowhub unique in the cannabis POS space?

George: The technical support. I've talked to so many customer service people and all I have to do is call them and be like, 'Hey, what's up? It's George.’ And they're like, ‘From the ReLEAF Center?’ Imagine how many people they deal with. It's great.

I live in a small town. Everybody knows everybody. That's how I feel when I call Flowhub. You're like family and they treat you like it. Their tech support team is just phenomenal.

[In looking for a new provider], you always want to check and see when you call that number, are you waiting an hour before you even get to anybody to direct your call? Or is somebody going to pick up and say, ‘Hey, what's up, man? What can I help you with?'

I want somebody to be nice to my employees. I want them to help. I want them to want to help. That's what I've gotten from Flowhub. Every person that I've talked to, I love their customer service.

"[With Flowhub] I spend two and a half minutes dealing with an issue when other places it could have taken two hours. So now I have all that time freed up to do inventory, to talk to people, to sell, to clean. It frees up a lot more time."

We run into hiccups, like anywhere. Some people get upset with it. I don't care. I'm going to call Flowhub. They're going to tell me what's going on. And if we contact them with an issue, they're going to talk to their development team and try to work it to where it helps you out. They do take your feedback. They take a lot of things into consideration as to everyday life and how it's going in the store because they want to improve too. They want it to be able to be useful and super easy for everybody.

FH: How does Flowhub save you time and money?

George: When I import my inventory, that could take me two hours. But I scan it and it imports automatically; that goes down to 15 minutes. It's so simple, it gives me more time to manage and to do my job correctly.

And we have the Nug that helps with checking in patients.

When you scan somebody's ID and it goes in immediately, you have their information, it tells you that their ID is valid, it tells you who they are. You don't have to worry about double-checking or running it through a different system to make sure that it's valid.

The purchase tracker makes it better because we don't have to constantly watch that, which takes us away from helping people. If we don't have to worry about the limit and adding it up in our mind or totaling the counts to it, it's foolproof. You look at this bar, you put something in, it tells you the limit.

I also like the reporting, because I can go on and see the executive dashboard of all stores combined. I can break down reports into different graphs whether it be sales, how many transactions you did, what the jump was from last month to this month. And you can do side by side comparisons.

As a manager, I like that aspect because it shows am I underselling something, am I not ordering enough of this, these customers that are coming — are 90% of them coming from Michigan? Where are they coming from? It gives us so much information to use. Reports make my job and my everyday easier.

An expiration report... instead of me going back into three rooms, counting inventory, I can look on Flowhub and run this report for all edibles that are expiring. I can print it, there's five minutes, but it would have taken me two hours to go through and check every product that we have for expiration.

We also use it for any specials or deals. Say you get 10% off a product, we can set it up in Flowhub. When it gets rung up on the cashier side, we don't have to discount it. We don't have to worry about any numbers, it's already discounted. And you can not only do it for each store, but you can control all the stores that you're associated with. You can do it remotely. Boom, it's set up.

"When you have hundreds of people coming in the door, it takes maybe 30 seconds less of you typing in a discount, and then that's 30 seconds more you can spend with your customer."

George
General Manager at the ReLEAF Center for Compassionate Healthcare

FH: How does Flowhub help your inventory process?

George: We go through so much inventory that you can have a SKU today and it's gone tomorrow. We got 57 cases of edibles, they'll probably be gone by the end of the day. 600 of them.

We have the Nug that helps with inventory. If we have a barcode on a box, we scan the box, it immediately uploads into Flowhub, and shows what you should have in the box for inventory. Compared to what I’ve done before with inventory, it’s foolproof.

[Flowhub] even helped with our grow facility, because once we get product from our grow, they can immediately transfer it over into Flowhub. Once we get it received, it's on the floor within an hour. That's huge because if you got an order of 60 cases, it's going to take you a second to enter each one by hand. With Flowhub, we scan, boom it's in, scan, boom, it's in. We set a price. It's gone. It's on the floor. That's huge. Again, it gives you more time to focus on what you want to focus on.

"[Flowhub] gives you more time to talk with your customers. I like that it literally simplifies my day and I can't stress that enough." 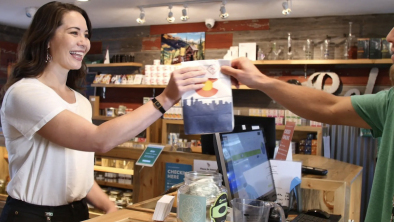 How the Green Joint lights up western Colorado with Flowhub 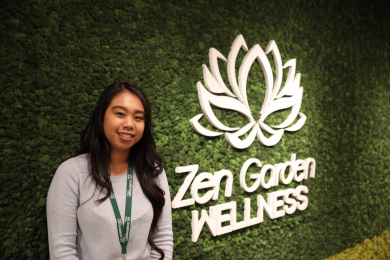 Zen Garden Wellness brings community and cannabis together with Flowhub 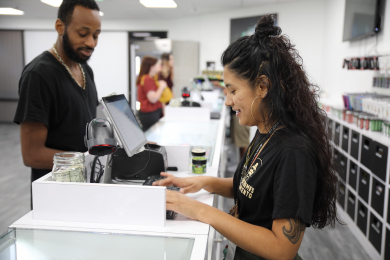 Book your personalized demo to see how Flowhub can help you increase revenue, modernize customer experiences, and stay compliant.